As a general rule, I hate sandwiches. I do make exceptions. Lately my favorite has been apple slices with cheddar, mixed greens and balsamic vinegar on a fluffy French roll. Last week, I had the sandwich in pieces and decided I should drizzle the balsamic on the bread first so the flavor was evenly dispersed. As I grabbed the bottle of vinegar off our kitchen shelf, I hit our second bottle of balsamic, knocking it to the floor. When i stepped back to survey the damage, my foot landed on the broken bottle, causing me to drop the vinegar I was holding.

I ran my bloody foot under the bathroom sink before the vinegar could hit my open wound. I fashioned a band aid out of paper towels and electrical tape, finished making my sandwich and waited until my foot stopped bleeding to clean up the mess. 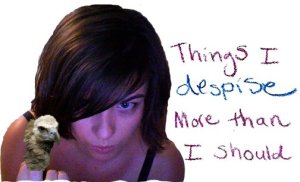 All I can think when I see Guy Fieri is: Who the hell lets you leave the house, let alone go on TV looking like that? I get it, your schtick is cooking low brow food, but you convey that by grinding pretzels to coat fried chicken and appearing on TGI Friday’s commercials. You don’t need to wear bowling shirts have bleached spiky hair with a dark goatee like you’re the singer from Smashmouth. (And no one, including the guy from Smashmouth, should look like the guy from Smashmouth. When they first came out, they were one of those bands that got equal play on the alt rock and poppier stations…which means the band ends up playing on light rock stations and recording covers for high school movie soundtracks).

When forced to watch “Guy’s Off the Hook,” I was crossing my fingers that the Food Network had a new fishing show. But instead, I got to watch Guy wear sunglasses on the back of his bleached head rile up the crowd in his studio kitchen before he did anything. It was exactly like a lead singer refusing to start the set until the crowd cheered to his satisfaction. And as I thought, “Guy might as well be playing the F***ing air guitar,” he started playing air guitar.

While reminiscing of his childhood pretzel stand, he said his dad still called him “Huck Finn” for making his friends work while he went on rides at a carnival. Nice literary reference Fieri family, but Tom Sawyer got his friends to white wash the fence. You fail. Oh and don’t menacingly point bottles of mustard at the camera, like you’re trying to douse me in it. It’s not funny. Buy some mustache dye.