There may be bigger and more famous parades in New York City, but there is no parade better than the Coney Island Mermaid Parade. It’s the kind of parade where the marching bands start playing on the subway en route, and they don’t stop when the parade is over. They reconvene on the boardwalk and try to play louder than the radios blasting reggaeton on the sand. There are no giant floats covered in millions of tiny roses; people build giant clam shells in the back of pickup trucks. Open container laws are non-existent on the boardwalk, there are so many topless women you loose count, but there are no skirmishes. Everyone is friends, just like in Coney’s heyday. Spectators and marchers alike are decked out in scallops bras, sea kelp, shark fins, fish nets, glitter, gold paint, lobster claws, coral reefs and tentacles. Some people threw their costumes together in ten minutes, others spent three weeks building theirs. It doesn’t matter–everyone looks beautiful as a sea creature. 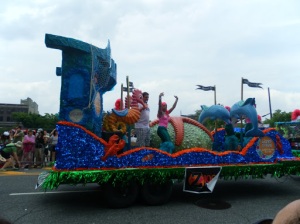 At the turn of the century, New Yorkers flocked to Coney Island by the thousands each weekend to indulge in the new-fangled leisure culture. The Victorian era ideals that fun also had to be constructive were disappearing. Fun did not have to be reading a novel with a grand moral meaning or looking at Jesus paintings in a museum; fun could be riding a roller coaster until you vomited. Upper and working classes alike went to Coney Island to watch a belly dancer’s gyrating hips, see a hotel shaped liked an elephant, to put on their lightweight suits or a pair of bloomers and wade in the ocean, and take a spin on rides like the Human Whirlpool. There was even a yearly Mardi Gras parade, but its run ended in 1954. In 1983, the Mermaid Parade was founded as a reboot of Mardi Gras. In with the sea creatures and mythical beasts are homages to Coney’s past.
Like old-timey strongmen.

Or nods to its seedy underbelly.

Every body is a bikini body at Coney. 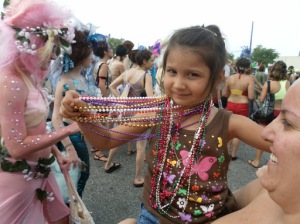 Parade tip: Stand behind a child with cuteness greater than or equal to this girl. The marchers are more likely to throw beads, candy and the ugliest tee shirts ever in your general direction. 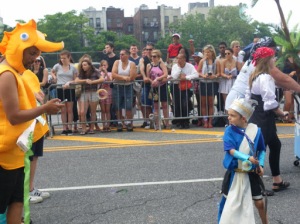 Little Neptune does not allow his seahorse guards to text while on duty. 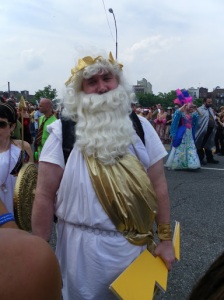 Me: Zeus, you don’t live in the ocean.
Zeus: I’m Zeus, I live wherever I want.