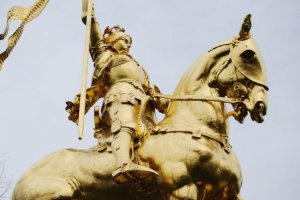 She sits in the middle of a traffic circle to commemorate the time Joan of Arc led the French army to defeat the English in Portland during World War I. Her flag got stolen a few years ago. K10 and I devised a plan to replace it with a pirate flag, but it was during the freedom fries period of history, so we didn’t it to come across as another form of anti-France. The next plan involved us getting a bunch of pinwheels and planting them in the ground, along with a sign that said, “We love Joan!” But apparently no stores sell pinwheels in September. Not even our favorite toy store, where we’d go in high school and spend equal time looking at the toys and the attractive male sales clerks.

Joan had her flag back next time I was in town, and we showed our love by yelling “Joaaaaan!” from inside of my car when we drove past. I always keep my eyes on the road while driving, but it takes some self-control not to get completely distracted by her peaking out from behind the trees and bus shelter. Joan is so gleaming gold that she even shines through the shrubbery when its dark. The goldness is even more blinding up close. My golden birthday is in twenty four days, and I wish Portland were a bit closer so I could go eat cupcakes and/or cookies in the tuft of grass around Joan. But it’ll be just as awesome to dart across the awkward crosswalks when I’m back west in June.