My goal for my elderly years used to be sitting on a porch in my long johns, chasing children with a pitchfork. I think I now want to be like this woman, and hit hooligans with cooking pans.

K10: But why aren’t there centipedes at the red carpet?

Me: Too hot. Their bodies would dry out

K10: They need to get it together!

…reaches a larger audience than a bathroom stall.

Aside from two blocks on a yellow commie bike in Copenhagen, I hadn’t ridden a bike in at least two years when I found one in my rental house. (I also found cans of Diet Rite Root Beer and a fine collection of spices from the 1980s in that house). While biking around Ithaca, I immediately developed a new trick while frantically pedaling to catch the bus when I was late for class: slipping, smashing my heels into the metal pedals and tearing the skin on my heels. The key to the trick was repeating it as soon as the wounds were healing.

One rainy night, I thought riding my bike the opposite way down a one-way street seemed like the best possible route, or at least fastest, to go home quickly before I had to work at the bar. I was paying attention to the cars in the actual street, and failed to notice a minivan that was parking until it was too late. I screamed, let go of the handle bars, allowing my bike to drop but still caused me to crash into the hood of the van. A little kid standing on the sidewalk asked if I was ok. The driver asked if I was ok. I muttered “yeah.” The little kid started pointing at me and laughing. I decided walking my bike home would be a good idea. Later that night, I was digging through my bag and panicked when I saw that my glasses case was completely smashed. My glasses were fine, and whatever impact they suffered made them slip down my nose less.

I do love art, but when it comes to museums I’d much rather look at pickled animals in jars.

The Staten Island museums delivers! Not only do they have dinosaur footprints, Native American artifacts, but they have glass jars with squid eggs, a flying squirrel, a hammerhead shark, and many more…

Never leave home without your matchbox full of rabbit droppings. These were on a shelf with the rind of a giant lemon and…

…a four-footed chicken. The chicken and magnified rocks were both pretty hypnotizing, but the minerals were more sparkly. (Though while talking to K10 later, she and I decided that rating how things ranked against a four-footed chicken is a really great way to measure awesomeness).

The entrance has a wall of several hundred insects, near a display of the horrors of the Asian long-horned beetle. These butterflies will not decimate forests…or will they?

Shadowboxes full of taxidermy animals is probably the only tradition I’d like to bring back from the Victorian era. 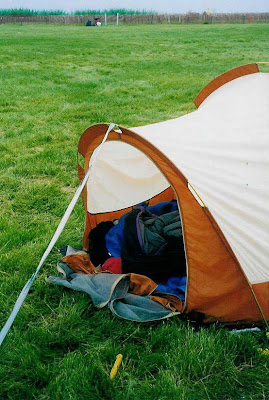 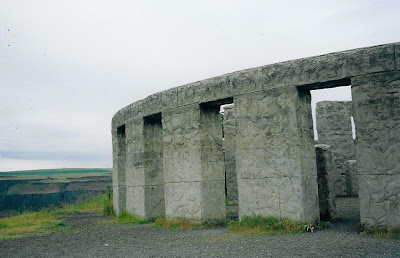 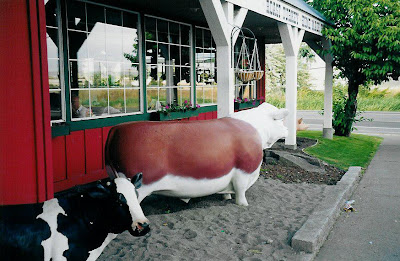 Circa March 2003, here is an Abraham Lincoln impersonator I saw walking through a mall food court in Boston like it was no big deal. The picture is small and blurry because I was going on stalker mode, but I totally saw him. 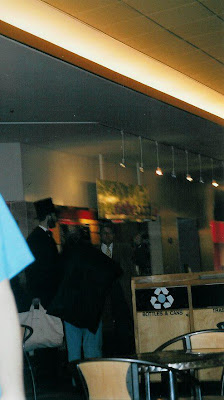 Three days before this, I worked a the “Lincoln Days” dinner at my catering job for the Republicans of Tompkins County. I walked back into the servery, and Abe was sitting at my boss’s desk eating dinner before going out to give the Gettysburg Address.

(I’ve got some more recent photos the world needs to see, but I’m having technical difficulties…mainly that I need to find batteries for my camera and figure out how to upload pics from my phone. I haven’t tried that hard to solve either problem. Yet.)

In the sixth grade, the girl sitting next to me spent a bit of free time in class pouring over an issue of Catmopolitan, Cat Fancy, or one of those other magazines filled with pictures of kitties that are a step above dressing the cats up as people. Out of curiosity and confusion, I glanced over her shoulder.

With her eyes still focused on the magazine, she said, “My cat’s in here.”
“Really?” I said. “That’s pretty cool.”
“Well,” she said, “I just pretend. But she should be because she’s a princess.”

I said nothing. This continued to be my tactic with this girl through the rest of middle school and high school.

I freaking love shaped cookies (see “Really important decision making”), but the word “cookie cutter” is a euphemism for “painfully boring and standard.” Even if you’re not that artistic or creative, you should have enough of a grasp on the world to think, “Oh hey! my kid likes butterflies and chocolate cookies! Maybe I should combine the two!” or “It’s Christmas, so trees would be appropriate and festive ” or “I’m gonna make bird and hammer shaped chocolate chip cookies just ’cause it’ll be awesome.” This year, slipped some Christmas bunnies into the standard holiday shapes, what ‘cha gonna about it, Better Homes and Gardens?